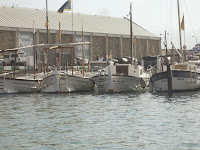 Last holiday we paid a visit to fishing vessels in the port of Palamos. It was very rewarding for everyone, but especially for children, they could see different types of  fishing boats. The boats begin to arrive about half past four p.m. The smaller ones, who can not go very far, have been leaving the port the morning before, the largest ships can stay even a week at sea! We could watch the fishermen as they arrived, unloaded the fish, prepared it  with ice and carried it toward the box. 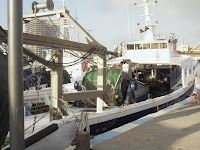 Once in the box, the fish is weighed, measured and divided into boxes. That day brought out many prawns and hake, but also large fishes, like a swordfish that caused much impact among  the kids.


Subsequently the boxes of fish pass through a film where all sit waiting for fishermen and fishmongers. The screen displays all the information: weight, catch location, price ... 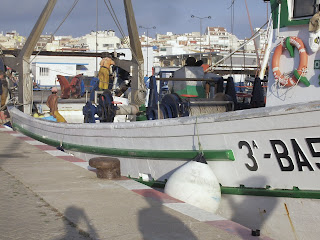 Everything happens very quickly, and when you realize the fish is already sold and awarded.

Finally we went to the market to be on premises to buy a few fresh shells for dinner.


It was a very educational excursion where children learned in a very direct path  the way of the fish,from  the  sea to the table.


Recommended for the whole family.


visita a la llotja
View more presentations or Upload your own.
Publicat per Carme Rider a dilluns, d’agost 23, 2010 1 comentari:

Bavarian landscape -summer
View more presentations or Upload your own.

Bavarian landscape -winter
View more presentations or Upload your own.